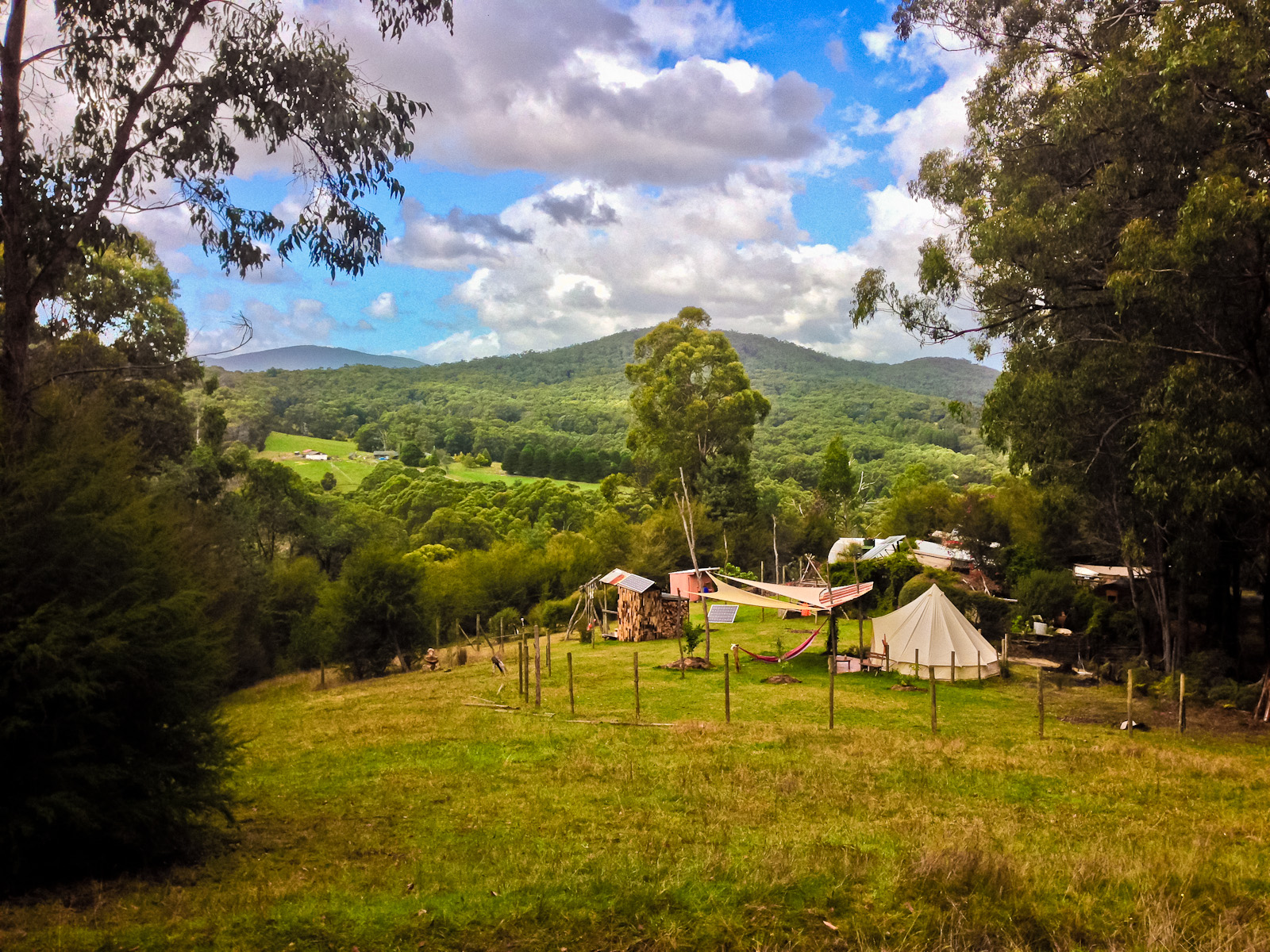 Time to reflect and heal

This week since leaving Moora Moora has been an interesting one but not necessarily because it was part of the regularly scheduled program. With no intentional communities on tap while we have a WWOOFing stint,

it has been a good time to reflect on things and where we are at on this journey.

I’ve just left Sunnyside Farm aka Natural Healing Place which is located in the beautiful hills south of the uniquely-named Launching Place, Victoria, about an hour east of Melbourne. As Heidi and I explore how different people do “Community,” we keep finding ways to redefine the word; Sunnyside is comprised of 32 year-old Nathan Thurlow and his 3 year-old son, with his extended family living further down the road on a large property. Nathan prefers to refer to WWOOFers as new “friends” and creates a welcoming atmosphere that encourages people to want to stay for awhile in his hand-made spa retreat-like home. The space is broken into pods connected by vine-laced outdoor paths, with accommodation that includes: a couple of

bedrooms plus a loft bedroom/office (our room) as part of the main building; a caravan trailer; a luxury tent; and a tiny caravan-like shelter. The lounge-dining-kitchen area is considered communal, not unlike the crossroads that is often created by intentional communities to enourage chance meetings and conversations. Among the other unique elements around the house area are a newly minted sauna (which looks like a pizza oven that you sit inside), 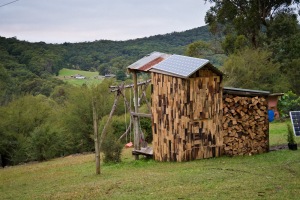 The loo with a view

outdoor bath and shower (the only bathing facilities, actually), a “loo with a view” which is one of two composting toilets and this one is situated on a covered outdoor throne with a beguiling view of the foggy hillsides, tin chook shed with happy scratching chickens and a productive veggie garden. Heidi and I took advantage of the outdoor bathtub which was very refreshing (especially in the very cool wet weather here!) as well as soulfully enriching as we sat looking at the trees, steam rising from the hot water as the rain fell and listening to the kookaburras sing. 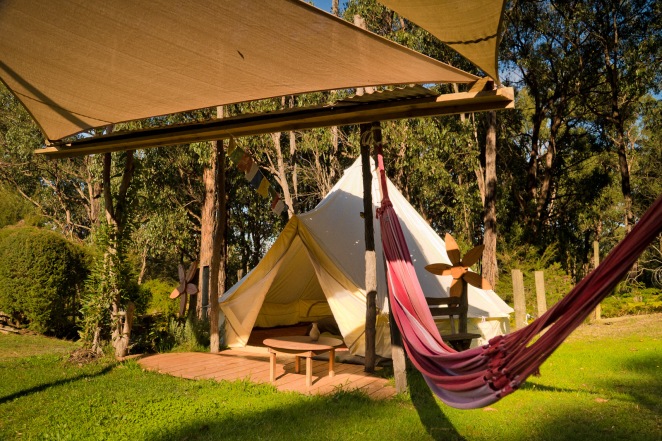 The luxury tent we would sleep in if it were summertime 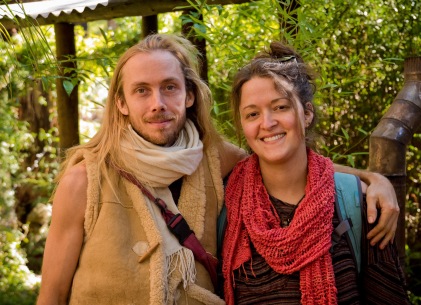 Nathan is a dedicated host, keen to share his learned wisdom about inner health through yoga, meditation, healthy living and positive thinking. Ironically, both Heidi and I arrived a bit burnt out, harbouring colds and probably needing to be guests at a place like this rather than as WWOOFers. As it happened, two days in, Heidi left to stay with her sister in Melbourne to get some down time, and I have taken a day off here to recover from my illness. Rather than be perturbed by the lost labour we were to have provided, Nathan has graciously taken it in stride and continues to offer his expensive organic wellness supplements, fresh ginger or chai tea, delicious fresh foods, helpful natural remedy advice and positive reading material for me while on the mend and leaning on his generosity. He lives a thrifty existence, so it is not with extravagence that he offers these things but through true kindness. I would go as far as saying he is quite servant-hearted, and his years of living an alternative lifestyle plus his self-education on different types of spirituality certainly show in his hospitality and deep caring for others. As he would say, perhaps in our current health/mental state, we were meant to come to him at this time; everything has its place and meaning for needing to happen when it does.

He could well be right about that.

In light of a bad cough and illness, it was perhaps not too wise for us to head on a little trip into the city on Wednesday (just prior to Heidi’s departure), with the two of us plus Mel (a WWOOFer who has been at Nathan’s for a month) and Kito. Our mission was to do some errands but mainly to watch a documentary called Dadirri: Deep Listening by filmmaker Helen Iles that we’d heard about at Commonground. The timing was impeccable as it was only the third small screening of this indie production whose theme revolves around the relationships within intentional communities, plus it featured places on our intinerary for this road trip (Commonground and Moora Moora, and the forthcoming Fryers Forest).

After visiting the Best.Organic.Shop.Ever. on High Street in Northcote and scarfing down another vegan meal at Vegie Bar in Fitzroy, we went up the road to a little bar called LongPlay which has a cute little 30-seat mini-cinema out back. The film was attended by a crowd of community-minded folks and there was a palpable buzz to being amongst others like ourselves. Helen is British but spent time traveling and filming around Australia for 2 years making this film, with two others in the intentional community “series” that were made in the UK. The film, while technically a bit sloppy (IMO), was an interesting examination on the relationship side to living communally and conflict-resolution, with lots of appearances by places and people we had literally just seen like Peter and Sandra (Moora Moora) and Kate (Commonground), which was all a bit trippy! I met with Helen afterwards to express an interest in working with her on future projects of similar content, but she was quite exhausted from the experience being that she shot, edited and directed it all herself. Shame we didn’t cross paths sooner!

Yummy outdoor spa bath for soaking under the trees

So, a few things to consider from this mixed-bag week, which was good. Moving forward, I think we’re currently at a bump in the road which is probably natural in a journey such as this: we have filled our brains with plenty of information and experiences; we have not been able to retire to a familiar home where we can periodically recharge and relax; we’ve been brought down a bit by illness and miserable weather; and we are generally feeling the grind of being constantly on the move. With a break in the weather this weekend (yay, sun!) and our final significant week-long stay at an intentional community (Fryer’s Forest, then we just have a couple of short stays afterwards), I’m hoping that we will get our second-wind to carry us through to June when we arrive back in Adelaide. It will be interesting to see where we sit with all this once we get back to a familiar place with familiar faces; my feelings about community have wavered with what we have learned, but it has likely been tempered with other circumstances related to travel and fatigue. Once we’ve had some time to properly reflect in a month from now, we’ll see what ideas and thoughts emerge!

2 thoughts on “Time to reflect and heal”