It feels like I’ve semi-abandoned the vegan and sustainability part of this site but I’m getting back into it as I ramp up my focus on plant-based living and working.

The last products I reviewed were 5 years ago and wow, have things exploded in the vegan realm since then. The expanded range of options in every food group is impressive and exciting as the vegan movement takes hold of the world’s meat and dairy eaters. There are so many good dairy-free options now too, that I suspect even on-the-fence vegetarians might finally ditch their one last hold-out to full vegan eating!

I’ve made this page more extensive and visual, and will try to give variations on the same product type in order to truly compare the options that you have. I generally review products that have meat or dairy equivalents since otherwise they can just be called “food” since anyone can and does eat them.

These reviews are particularly geared towards former omni eaters who are keen to have that meat or dairy favourite available as a tasty cruelty-free equivalent.

Ratings are for what I consider the important elements of an appealing food product, with “Texture” being one that you might not normally see for other food reviews, but to me it is quite indicative of the success of a meat or dairy substitute. I choose “Value” over “Price” as vegan foods are generally more expensive than their meat or dairy counterparts (or rather, the latter are unreasonably and irrationally cheap given what they are) so I choose to focus on how good they are for the amount you pay.

On to today’s reviews:

I have seen Upton’s moustached men gracing their product boxes on grocery shelves for a couple of years now, but was only just made aware that this Chicago-based brand has been around since 2006. Their website shows off an impressive and mouthwatering array of products, many of which we still don’t get here in Australia (I’m looking at the seitan chorizo and mentally willing someone to distribute that here!) I did, however, note that this particular one that I am reviewing – the Massaman Curry – is a “Product of Thailand” so I’m afraid to ask if the ingredients are sourced in Thailand, shipped to America to prepare and then shipped to Australia for us, meaning there’s a whopping 25,000+ kms of fossil fuels attached to this item. Eeek!

Pushing that aside for the moment, their local distributor has just started importing the Massaman and I have to say, it is bloody delicious. There is a slightly enhanced zestiness to it that I wouldn’t say is my vision of a typical “massaman”, but it doesn’t matter because the plate is empty before you’ve had long to critique that point. Rich with flavour, crisp and fresh-tasting veggies, firm and flavourful tofu – it really was a satisfyingly delish meal.

The meal comes in microwave-ready vacuum-sealed plastic pouches, with separate purple rice, curry and crushed peanuts. My only peeve is that the package says it is “2 serves” which is quite wrong. It is only a 280g/480Cal packet and the serve that I heated up was smaller than my usual single-serve of curry (and I don’t eat exceptionally large serves by any means). It is really just a light lunch size but not a dinner for 2 or “I’m rather hungry” size. Because of this, the $9 price point is a bit steep for what it is. It may well be more expensive due to importing from the US (but then I do see it at US online retailers for US$6 so that’s comparable). I could understand the seitan or jackfruit or other specialty “meats” being a bit pricer, but non-organic tofu, rice and veg shouldn’t jack up the price that much.

Overall, a great choice for a guaranteed delicious meal, though not 100% “massaman-ish” and a bit pricey for the size you get.

Far and away the best nut milk I’ve come across to date. It is pleasantly creamy and not watery like so many long-life almond milks (probably due to having 2-3 times as much almond and coconut than other mylks). It only comes fresh (not in long-life tetra packs) so that might contribute to its more “lively” flavour too.

It is organic, has no thickeners, is slightly sweet (brown rice syrup) and is perfect for nearly everything I might have used dairy milk for in the past. When I go back to other almond milks, they taste limp and bland by comparison. Other coconut milks just taste like watered down coconut cream you’d use for cooking. It also doesn’t separate in tea or coffee like other organic milks I’ve had (I’m looking at you “Australia’s Own”).

Price-wise, it’s also the most expensive compared to any of the long-life milks. At normal non-sale price, they often sit at nearly double the price of others. Given that the others almost seem unpalatable now that I have had Bruce, it seems like good value, though it still adds up and I cringe a bit when I pile on 3L in the cart at over $17!

The brand is fun, it’s local and I love em! Yummmm! 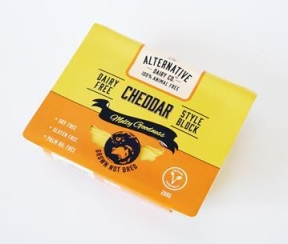 Dairy cheese is a strange confection as it has a property which makes it congeal and go gooey, and for some reason we have found this to be appealing. I would be lying if I said that I am not attracted to this feature when it comes to pizza or lasagne or Mac n’ cheese, but it’s still a weird thing. So of course we want our dairy cheese substitute to have the same characteristics, but many vegan cheeses struggle to simulate this well.

As far as rating a vegan cheese, this is a semi-important feature in my book as it does bug me when you make a pizza or toastie and the cheese is in a semi-solidified state even after cooking for awhile and now it is at risk of burning.

Alt. Dairy Co. has found a happy place where their cheese has excellent texture, bold flavour without a dominant coconut oil taste and pleasant meltability. It is still just cheddar, but you wouldn’t feel embarrassed to serve it to your bovine-breast milk-loving friends. High snackability on crackers or straight off the block. The feature that bolder flavoured non-dairy cheeses I’ve had might be the potato starch which I think might be the secret agent to making good faux cheese. Another favourite brand of mine, Vegusto, use potato in theirs and it is also delicious and not relying just on coconut oil to get by.

Overall, this is a great effort from a local company who are just starting to make headway with their brand. I look forward to trying more of their offerings!

Not that “wow” perhaps but making some good strides in the vanity/bathroom area. Pleased with myself at getting electrics run into the walls and a 👍🏼 from a visiting sparky.