A question that is frequently asked of vegans is: if you are against the idea of consuming animal flesh and think that humans don’t need it, then why do you eat pretend meat and dairy products? While not all vegans eat faux meat depending on how long they have been vegan and why they gave up meat in the first place, there is a large market for mock-meats by vegans for good reason. For the most part, this can be boiled down to tradition, flavour, protein and social-acceptance. But let’s unpack it a bit…

If we first dial all arguments back to core rationale, vegans are either:

The main things that meat-eaters have on their agenda besides basic sustenance are: flavour and protein. And maybe “tradition”.

Looking at faux meat and dairy strictly from the omni “flavour” perspective, the past 3 or 4 years in particular have seen an immense increase in not only the volume of great-tasting vegan products, but a rise in innovative preparation of those products which is delivering vast improvements in taste and texture. 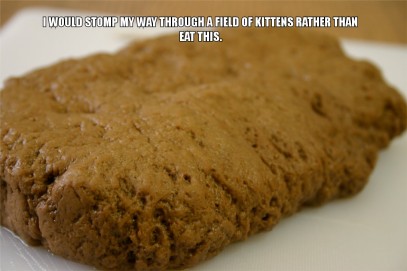 If a meat-eater hasn’t tried vegan products for over 5 or 6 years and are still claiming vegan meats are tasteless and rubbery, they are basing their assumptions on early incarnations that used more basic technology and ingredient arrays to contribute to a much less exciting flavour. To be honest, anyone would be forgiven for criticising early vegan foods, many of which are inedible by today’s high standard of gastronomic delights.

In addition to flavour, the nutritional component to many vegan products is at a very high standard. In an effort to further attract buyers that may be looking for products strictly for health rather than compassionate reasons, there are countless organic, gluten-free, preservative-free, low saturated fat and low GI foods made from whole foods which make “going vegan” an even healthier option. Given that these foods are now marrying health and full flavour to create an alternative to most meat and dairy items, there seems less and less reasons to be able to rationalise breeding, raising, feeding, torturing and slaughtering sentient beings and then storing hunks of rotting animal carcass in order to obtain something that can be done an a far more humane, efficient and nutritionally complete manner.

Speaking specifically on protein, thanks to an increasing array of comprehensive studies, we are able to confidently strike back at nay-sayers when it comes to a plant-based diet. One such large study recently compared the nutrient profiles of around 30,000 non-vegetarians to 20,000 vegetarians and around 5,000 vegans. We now know that vegans average 70% more protein than the recommendation every day (RDI). Protein is by far the most overstated nutrient. People are unnecessarily obsessed with protein – but it’s very, very difficult to actually be deficient in protein, and only people who are falling far short of their recommended daily calorie requirement (such as people with eating disorders) will be deficient in protein. It is very easy for a vegan diet to meet the recommendations for protein. Nearly all vegetables, beans, grains, nuts, and seeds contain some, and often much, protein. So, back to the original question: why does faux meat and dairy even exist and why do many vegans seek these products out? The simple answer of course is that most vegans once ate meat and dairy as tradition led our parents to feed us that stuff, as well as being conditioned by the Powerful Influencers (corporate advertising). Now that we have left that cruelty mostly behind us, we are still left with familiar meals and flavours that we enjoyed. Seeing as we are unwilling to enjoy those flavours at the expense of an animal having to lose its life or be tortured, mock-meats became a suitable substitute. It’s not that we eat faux meat because we want to imagine the flesh that went along with it, its the seasoning, texture and flavour that is familiar and that we can have but without the cruelty.

The ethics and values of vegans are our strength, and we literally gave up on our so-called “favourite” foods because it wasn’t worth eating them if something had to die miserably or kill the planet in order to fulfil a selfish pleasure. I have great admiration for vegans who did this when there was no alternative (eg. 10, 20, 30 years ago) but to completely change their diets overnight and not be able to still enjoy the flavours they had become accustomed to. Of course, even worse back then was the fact that you were surrounded by meat-eaters giving you grief about your choices.

I would like to ask a few questions to meat-eaters, such as:

The bottom line is: we don’t need meat and dairy. If you are a vegan reading this, then you are living, breathing proof that you are not currently dead because you are missing meat and dairy from your diet. For those meat-eaters who claim that it is their choice to eat meat, then I will say that your choice is a selfish one: the accumulated death, resource depletion and money tied up in health care due to your choice affects us all. It’s OUR PLANET TOO. Best yet, there are delicious alternatives so you don’t have much to give up!

Further reading on protein sources and amounts, especially if you are an athlete wondering how much to get, try the No-Meat Athlete or this guide at Healthline which shows specific food types and how much protein and other nutrients they provide.