Here’s a quick video post for our tiny house project. This will be part of the documenting of our journey that I intend to do through the various steps of our temporary accomodation, design, organising and build phases of the experience.

This brief video gives viewers a sense of what it’s like to endure a wild South Australian winter storm while living in a tent! Stay tuned for our next video where we finally dive into the start of our tiny house build! 😀 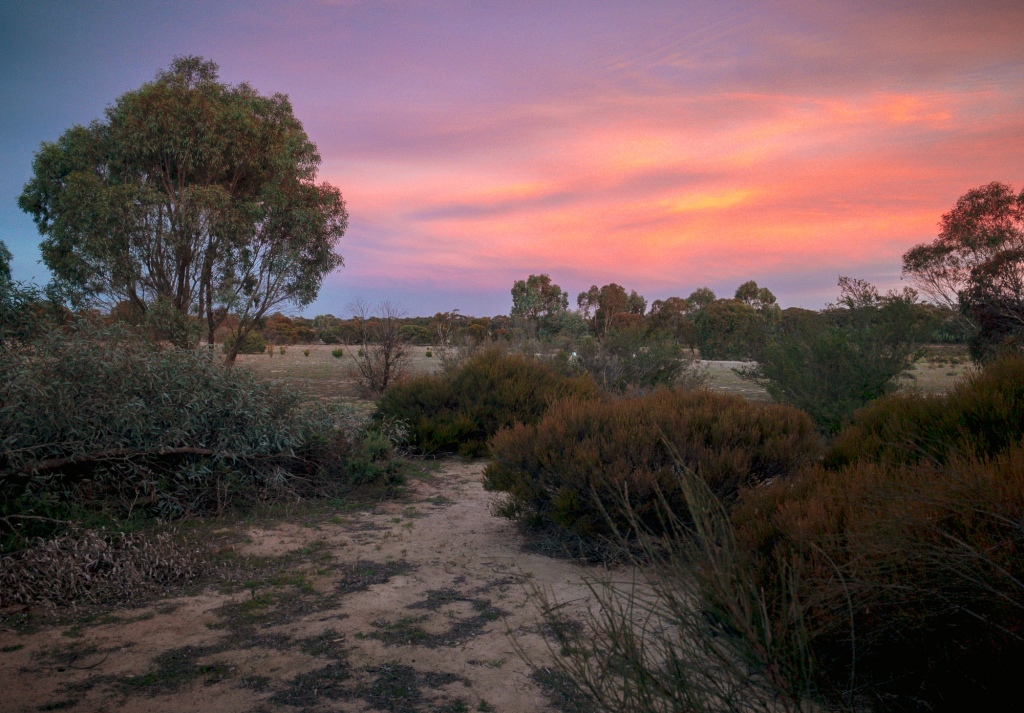 I’m sitting at the pub typing this. It has become my weekly respite and reward for both escaping the winter of tent-living and as a treat while Heidi is in the city and I have been working on the property. It is also one of the few times in the week where I can have a cold beer because yes – after nearly two months – I still don’t have a fridge in order to keep my own beers cold. Or anything else cold. Well, except that the WORLD is cold (read: winter).

The fridge thing hasn’t been a huge issue due to that fact about it being winter that I just shared. You can actually manage to keep an amazing amount of stuff cool enough not to die of salmonella poisoning when the outside temperature dips down to 3 or 4 degrees most nights and you don’t keep things for more than a couple of days. We shop frequently, eat lots of fresh veg (I don’t think meat and dairy eaters would be able to cope) or tinned beans, etc and only really have to do without things like dips or spreads plus any other long-term stuff like frozen goods.

Of course, the reason for having to live like this is a long series of stuff-ups with solar inverters that has literally dragged on for over a month. Short version: I was sent the wrong one (24V instead of 12V), changed my set-up to accomodate it, then the inverter didn’t work anyway, got bounced around by the retailer until they (an eBay store, *sigh*) finally replaced it, then they forgot to send it, it subsequently went out of stock, they refunded me at last, then I had to buy a new one and have been waiting for it to be delivered. Whew! Next week, with any luck, I will have my solar system running 100% and can write my blogs in my tent with the battery charging, lights a-blazing, stereo pumping, fridge a-chillin’, cold beers a-flowin’.

Things are settling into place otherwise with only one Interruptus Massif of late: wind. Not from too many beans (though there’s that too: Heidi and I went through a 4-bean mix phase and the 4-bean mix went through us too! I digress…) but rather from naughty, naughty cold winter fronts rolling through and wanting to rearrange our tents.

Twice so far we have had 80-100+ km/h gusts rip through on cold, wet days and nights combined with walls of sand and dust. In both instances there was a tremendous amount of profanity along with torn tents, multiple snapped guy lines at regular intervals, water ingress, sand ingress, items being hurled onto the floor of the tent, emergency bell tent collapsing… all supplied with the requisite violent canvas buckling and flapping. The first time I was stuck alone for awhile as Heidi was in the city and I was literally running from disaster to another for hours, all the while the tent was trying to jump into the nearest tree. 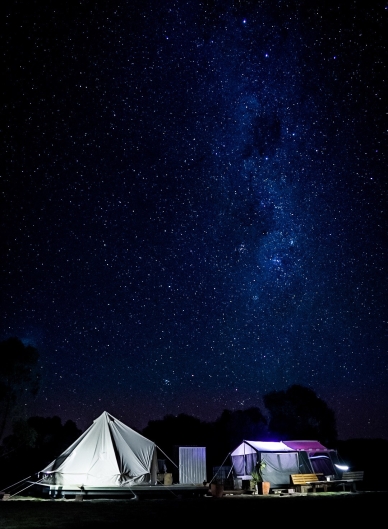 Luckily the extreme wind is the exception not the rule. But it is a generally windy place, unfortunately. However, when it does get calm and clear, there is something entirely magical when the sun goes down and the inky black sky reveals a blanket of jewels. The stars here are a real treat and highlight. Before we had running water in the tent, I would pay a visit to a nearby bush to brush my teeth each night, just staring up the entire time looking at The Great Rift (that dark streak across the sky through the Milky Way) which is all completely invisible in the city. Shooting stars, dazzling planets, satellites and often colourful moon phases fill the sky while the vacuum-like silence allows you to focus at its beauty undisturbed by the noisy modern world. Even if I need to make a middle-of-the-night visit to another lucky bush for some bladder relief, my grogginess is quickly sharpened up as the impact of the glistening sky grabs my attention for a few extra moments before shuffling back to bed.

Moving on from tent village set-up and the rebuilding/tweaking from wind damage has been trickier than expected. Once the immediate challenges of setting up our temporary home had mostly been sorted, I found it hard to switch gears and engage with a new and much more imposing challenge: building a house. My focus has been wavering a fair amount along with my own mental struggles playing a part as they have been the past few years. It’s easy to get caught up with daily activities and distractions of tent living, compounded by short winter daylight and general desires to hibernate rather than embark on an epic project. I’m also a poor starter: whether it is a work project or a personal hobby, I am a terrific procrastinator.

Gentle prods from the other folks in our community have helped get my engine going and this week, at long last, work began on the tiny house. It is not glamorous by any means and in some ways it is a tough way to begin: tear out the aluminium floors from the trailer so that we can start building on a bare base. These floors are warped and heavily-used, a haphazard matrix of welding patchwork, rivets, screws and decaying fibreglass underneath. However, there is a strong motivation now to get past this first test, in order to see the blank canvas and begin our creation. I’m looking forward to sharpening my focus and waking up each day with purpose. It’ll be a long road, but hopefully the start of an exciting journey!

Another quick post introducing my second video for this project. This will be part of the documenting of our journey that I intend to do through the various steps of our temporary accomodation, design, organising and build phases of the experience.

This video touches on the setting up of our temporary tent “village” with the trials of setting up in winter and technical challenges.

Not that “wow” perhaps but making some good strides in the vanity/bathroom area. Pleased with myself at getting electrics run into the walls and a 👍🏼 from a visiting sparky.